It’s never just about the music 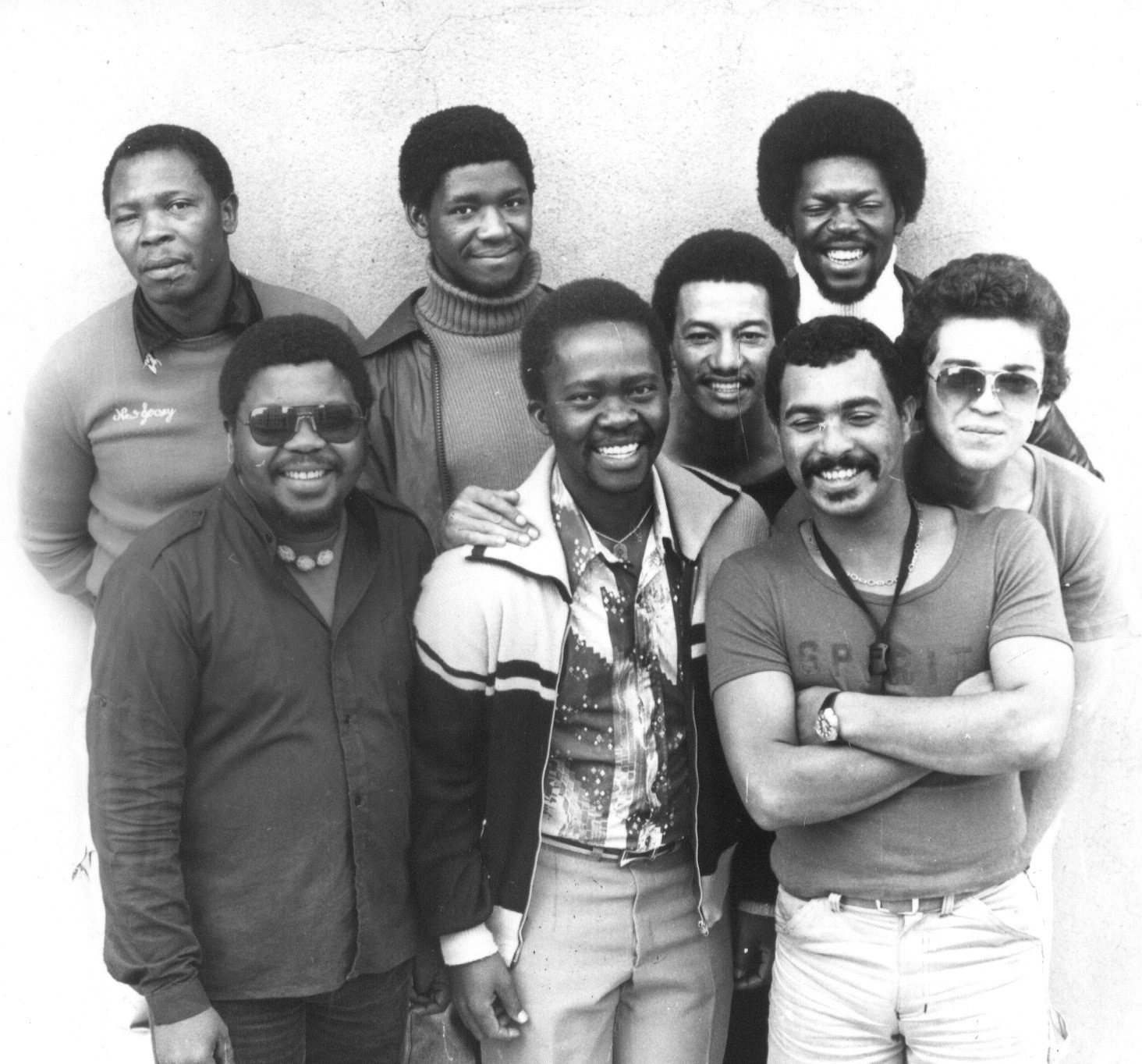 Vinyl reissues are about engaging in a fight against forgetting much more than music. Gideon Nxumalo and Spirits Rejoice's music is transcendent of repressive daily conditions.

In South Africa, it’s never just about the music. And doubly so where South African jazz is concerned. There is also meaning, context, history, and politics to contend with, and here South Africa’s jazz is a synecdoche, out of which tumbles the broad swathe of a history of turbulence, trouble, defiance, and hope. And so it is with two upcoming vinyl reissues from Matsuli Music, a record label specializing in South African rarities and jazz classics: The 1977 jazz fusion breakthrough African Spaces from Spirits Rejoice and the long lost 1968 recording Gideon Plays by the visionary jazz composer Gideon Nxumalo.

They are wildly different albums, but in the manner of siblings: they stretch into their own corners, speak their own dialects, yet they are of a bloodline and undeniably fraternal, successive signposts on a South African jazz cartography that is no narrow thing.

No matter which way you cut it, Nxumalo is a central figure in the genre. A university-educated composer, he was the first South African jazz artist to incorporate traditional musical sources and instruments. It’s been said that Nxumalo could transition easily from Mozart to Marabi and back again in the course of one eclectic and erudite sitting. He wrote multiple music scores, including that for “Sponono,” the first South African production on Broadway, taught music, and mentored multiple budding artists.

Even on a first listening of Gideon Plays, his singular talent as a composer and pianist is unmistakable. This is urbane bop with a distinctive African edge. Like many things that are beautiful and true, there is a plurality to the compositions, but as presented here, these manifold strands become one. This is music that demands that you stop and listen. It is music as an act of healing.

Because with Nxumalo, of course, it’s not just about the music. He was also one of South Africa’s most significant radio presenters and jazz tastemakers. Fom 1954 onwards, nicknamed “uMgibe,” he hosted “This Is Bantu Jazz,” South African radio’s premier jazz show, and helped popularize the term Mbaqanga (meaning, literally, traditional steamed maize bread, but figuratively, the popular working-class “daily bread” of musicians) for the music of the era.

Then, in March 1960, came Sharpeville, when 69 people were gunned down and more than 180 wounded after police opened fire on a crowd protesting against discriminatory pass laws. The massacre marked the beginning of an era of repression of African culture as the government imposed a state of emergency and put activists who challenged apartheid laws on trial. Nxumalo was not politically naive, nor unaware. In the aftermath of Sharpeville, he knew which way the compass pointed. Defiantly, he played records with political connotations on the radio, and it cost him his job.

Undeterred, he continued to find ways to rebel. On his 1962 album Jazz Fantasia, he disguised a quotation from Nkosi Sikelel’ iAfrika in one of his songs. That same year, he played a role in the movie Dilemma, which was based upon the banned Nadine Gordimer novel A World of Strangers, and filmed in secret in Johannesburg.

By an Act of Parliament in 1962, the apartheid regime legalized imprisonment without trial. Many South African artists went into exile, and would continue to do so for almost three decades. Nxumalo could not have left even if he had wanted to: he was refused a passport.

By 1968, he had not been heard on record or radio for years. Gideon Plays thus marked an overdue return to the studio for one of South Africa’s most brilliant and pioneering jazz artists. But after a limited pressing, it was seemingly lost to history.

Spirits Rejoice (named in honor of Albert Ayler’s 1965 live album) is a band of truly formidable jazz and fusion pedigree. Drummer Gilbert Matthews, who passed away in 2020 was foundational in the group’s inception, and Spirits Rejoice also included iconic bassist Sipho Gumede, Russell Herman and Enoch Mthalane on guitar, reedmen Duku Makasi and Robbie Jansen, George Tyefumani and Themba Mehlomakhulu in the brass section and, in different iterations, Bheki Mseleku and Mervyn Afrika on keyboards. In other words, a supergroup. Together, they created the South African response to the international call of modern jazz, and African Spaces is their debut recording.

A couple of the songs lean towards pop and accessibility, even as the complexity of the underlying musicality subverts any expectation that pop ought to equal simple. But it’s on the more angular, serrated, and boldly neoteric tracks such as “Mulberry Funk” and “Savage Dance,” and “African Spaces” that things really get interesting. They are ambitious and radically progressive. There is a sense of fun in the experimentation, as well as a couple of bass licks so dirty, they’d make George Clinton blush.

This is not music without a message,  implicit or otherwise, and politically-charged lyrics lacquer over a deceptively simple hook on “Makes Me Wonder Why.” How could it be otherwise? This album was recorded mere months after the 1976 Soweto uprising, when protests sparked by the introduction of Afrikaans as the medium of instruction in South African schools were met with murderous police brutality and hundreds were killed.

As is detailed in Francis Gooding’s liner notes, language, race, and politics also had a bearing behind the scenes within the band as Mthalane fell out with the band’s white management and was fired, a situation “caused in part by Mthalane’s principled refusal to speak English over isiZulu.”

If Spirits Rejoice were very much a band of their time, they were also in some ways too far ahead of their time, so much so that they struggled to find a South African label brave and progressive enough to release such groundbreaking and radical jazz, and this album was only ultimately released in 1977.

It is in the act of remembrance and re-evaluation of such music that a fuller appreciation of the hidden spaces in this country’s struggle heritage come to light. There is deep history to be excavated. Each in their own way, these albums are psalm songs of the South African jazz holy grail. Within their blending and improvization (which is, after all, an insistence, at the heart of all jazz, on the right to be free) they contain an implicit condemnation of the cultural and creative repressions of apartheid. They weave a curious musomancy into something that is both grounded in material reality and unmistakably South African in idiom, and yet simultaneously beyond memory, beyond history, universal. This is music that is not just heard. It is felt.

They are also capsules of a time and a place. Indeed, place provides a fascinating throughline between the two albums. Dorkay House, on Eloff Street in Johannesburg, was a cooperative rehearsal complex and music school. Even after the Group Areas Act and the razing of Sophiatown in the 1950s, it was also an integrated and extraordinary meeting place for all sorts of artists, home to a wild cross-pollination of creative and musical impulses, even as the regime sweated to keep people apart. Dorkay House’s alma mater could fill a South African jazz hall of fame: Miriam Makeba, Abdullah Ibrahim, Hugh Masekela, Jonas Gwangwa, Kippie Moeketsi, Pat Matshikiza, Ntemi Piliso, John Kani and many more. Dorkay House was also home to the African Music & Drama Association, where Nxumalo taught piano and theory.

In 1974, it was at Dorkay House that members of Spirits Rejoice, who were originally from Cape Town, Johannesburg, Gqeberha (then Port Elizabeth) and Durban, came together and emerged organically from the complex matrix of mid-70s South African jazz to distill their own particular flavor of the zeitgeist.

There is a tinge of melancholy in re-treading this story in the here and now. Something elegiac in these recordings, these rememberings. An online search for Dorkay House elicits a roll call of obituaries. The old venue itself is in dire need of restoration, fading particularly quickly after the death in 2018 of Queeneth Ndaba, matriarch of Dorkay House and one of its keenest proprietors and defenders.

Dorkay House was so much more than four walls. It was a space transformed by those who inhabited it, and imbued it with humanity, fragrance, sound. It was colonized space reclaimed. It was also, importantly, a space where artists organized, doubling as the base of the Union of South African Artists, under which an enormous number of people trained and worked.

Gone is Dorkay, and gone any semblance of a broad musicians movement. These things need to be remembered, now more than ever. In the midst of a pandemic that has devastated the arts industry in South Africa, millions of rands meant for the relief of musicians and artists has been mismanaged. In March, a group of artists staged a month-long sit-in at the National Arts Council’s offices, demanding answers. Meanwhile, the SABC is dragging its feet on the more than R250 million it owes artists in royalties, despite a multi-billion rand bailout.

The hue might have changed, but the struggle continues. Today, South African musicians are beholden to predatory capital, the hidden exploitation of streaming platforms, and a seemingly indifferent government.

And so, as we engage with vinyl reissues such as these, we are also engaging in a fight against forgetting much more than just music. These are valuable artifacts of South Africa’s musical history that were transcendent of repressive daily conditions. Challenges remain in the here and now. The vibrant, radical artists of today’s South African jazz are the descendants of such soothsayers of the non-verbal, speaking truth to that which cannot be silenced. They are still learning to look at themselves differently, still redreaming the world, hidden gods speaking from within them a new language we will all need to learn in order to talk to each other. It’s about much more than just music.